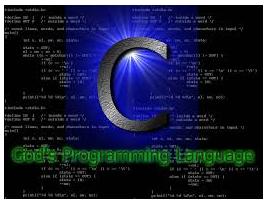 C language is a computer programming language , it has the characteristics of high-level language , but also has the characteristics of assembly language . DMRitchie launched in 1972 by the Institute of American Bell , 1978 , C language it has already been ported to the medium and small and microcomputers , which can work as system design language , writing system application , the application can also be used as a programming language preparation of an application does not rely on computer hardware . It has a wide range of applications , with strong data processing capabilities, not only in software development, and various research need to use C language , suitable for writing system software , three-dimensional , two-dimensional graphics and animation , specific applications such as SCM and embedded systems development .

C language is a 1972 design by the American Dennis Ritchie invention , the use of DEC PDP11 computers for the first time in the UNIX operating system. It consists of an early programming language BCPL (Basic Combined Programming Language) development evolved , in 1970 , AT & T Bell Labs, Ken Thompson designed according to BCPL language and more advanced language named B , and finally led to the C language advent . A before B and language as well as language , named after the world's first female programmer Ada ( Ada ) .

With the increasing popularity of the microcomputer , a number of C language version. Since there is no uniform standard, so that there are some inconsistencies between the C language . In order to change this situation, the American National Standards Institute (ANSI) as ANSI C language to develop a set of standards to become the current standard C language .

Note: The International Organization for Standardization ISO has also developed a standard C language is used by many compilers , such as : GCC and so on.

C language is the world's most popular and most widely used high-level programming languages.

In the operating system and system hardware to use the program and the need to operate on the occasion , the C language is superior to other high-level language , strong many large applications are written in C language C language graphics capabilities , portability , and has strong data processing capabilities, and therefore suitable for writing system software , three-dimensional , two-dimensional graphics and animation. It is a high-level language for numerical computation .

Dennis Ritchie , father of C language , the father of UNIX . 1978 Brian Kearney and dry (Brian W. Kernighan) together published a famous book "C Programming Language (The C Programming Language)", the book has been translated into several languages ​​, becoming the most authoritative C language teaching one . October 9, 2011 , Dennis Ritchie died at the age of 70 years .

Dennis Ritchie , the full name McCarley Steyr Dennis Ritchie . American computer scientist, to the development of the C language and other programming languages ​​, Multics and Unix operating systems , such as making a great contribution. Richie study at Harvard University, graduating in physics and applied mathematics , in 1967 he entered the Bell Labs , in 1983 he received the Turing Award with Ken Thompson . The reason is that they " research and development of generic operating systems theory , particularly the achievement of the UNIX operating system ." Ken Thompson and Dennis Ritchie in 1999 for the development of both the C language and Unix operating system won the U.S. National Medal of Technology together . Rich grew up in , there are two people on the impact of his biggest one is his father , and the other is his best friend , is also the inventor of UNIX Ken Thompson . Especially the latter . Had asked Dennis , who was his idol , whether in the field of computer or other areas ? He said : I am not a hero growing up under the influence . Obviously, the greatest impact on my career character is Ken Thompson . Most of his work is UNIX , it is also the older C language , the same Plan 9 system is also most of the work he has done . And in the meantime Ken made ​​the first computer chess master .

Richie who has a lot of valuable character : first, he is very interested in doing something . If the original intention was not to create a Unix to make money , in fact, beginning to save money , or to their game to a more economical mounted inside the machine . Second, out of the comfort zone of work is necessary. Ridge was originally a physicist and mathematician , but he has become the most legendary programmer. Obviously, he 's developed his professional background or Unix C language played a big help , as Richie said : "We should not fear to work in an unfamiliar field ." If Ritchie spent several decades on obscure mathematics, perhaps Unix will be aborted. Third , there must be innovative thinking. Unix at Bell Labs was lucky there adequate funding , not lack of staff , his condition and his friends have their own schedule to develop what they want . Finally , to know how to share. Many companies prefer secrecy , his core technologies into hiding , which seem Ridge unsuccessful .