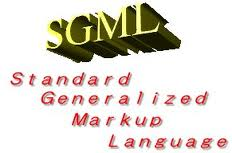 SGML has a very strong adaptability, it is precisely because of the same reason, resulting in small-scale applications difficult to spread.

HTML and XML are derived from the same SGML: XML is considered a subset of SGML, and HTML is an application of SGML.

XML produced is to simplify SGML, so for more general purposes, such as the Semantic Web. It has been applied to a large number of occasions, more notably XHTML, RSS, XML-RPC and SOAP.